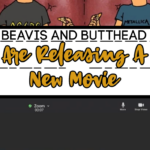 Beavis and Butthead are coming back in more ways than one!

In addition to the new reboot that was announced just last year, the two best friends are coming back to Hollywood for more because a new movie featuring the life long campions is coming soon!

The iconic characters revealed the news themselves in a short clip so there’s no rumors, or what-ifs, this you guys, is the real deal.

The short clip starts with Beavis and Butthead sharing a zoom call sitting on a very familiar couch.

“So like, eh…we’re making a movie,” Butt-Head says in the clip.

“And it’s gonna be on Paramount+ — kick-ass,” Beavis adds.

The film will be a follow-up to Paramount Pictures’ previous movie, Beavis and Butt-Head Do America and rather than watching the movie up on the big screen, you can watch the sequel in the comfort of your own home!

The movie will be released on Paramount+, the studio’s upcoming streaming service!

Unfortunately I have to break your heart to tell you a release date has yet to be confirmed for the upcoming new movie but for now, keep your ears open because I have a feeling Beavis and Butthead are coming back for another zoom call!