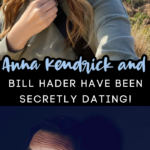 Is it hot in here or is it just Anna Kendrick’s and Bill Hader’s love life?

The two celebrities have some pretty big news and what’s not so secret anymore is the chemistry between these two love birds; that’s right, the two are d-a-t-i-n-g according to People!

When Did Anna Kendrick and Bill Hader Start Dating?

According to a source who told People, the two have been dating on the down low for over a year now!

“Anna has been dating Bill quietly for over a year,” said the source. “They met years ago. She’s hosted Saturday Night Live and they’ve done a movie together, but they got together well after the movie.”

And incase you’ve forgotten, the two costarred in Disney+’s Christmas movie Noelle together back in 2019, how cute!

“They are both very private people, and with the pandemic it was easy to keep it quiet,” explained the source. “They’re both hysterical so they must keep each other laughing all of the time. She’s really, really happy.”

With more than 365 days under their belt as a couple, we wonder if Anna’s views on ‘finding the one’ has changed since her previous interview with Emmy magazine in 2020, when she noted that she doesn’t believe in soulmates.

“Like, that word is kind of synonymous with ‘the one,'” she stated to Emmy magazine in 2020. “There’s many ‘the ones’ and if we’re lucky we spend a long time with someone.”

Soulmates or not, the two are such, a cute pair!

The romance that slipped right under noses but nonetheless, we’re very happy for the two love birds and we wonder if they’ll post anything for Valentine’s day since the countdown to Cupid’s day is already here!