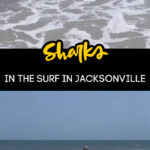 With all the shark sightings we’ve seen in the last couple years, there is NO WAY you will get me into the ocean.

Up until today, I would go about ankle deep in the water — knowing that sharks couldn’t get me that close to land.

That was until I saw this video of sharks in Florida.

The video was taken just this week, and it shows sharks playing in the surf, dang near about ready to crawl up on the land.

In one scene, you see bystanders on the beach, sharks in the background, and lifeguards bringing someone to shore. SCARY!!

People on the shore can be heard yelling, “Get Out Of The Water!”

I’ll tell you what, I’ve seen Jaws one too many times, and this is life imitating art in a pretty uncomfortable way.

There is also a totally unconfirmed report that a man was attacked that same day at a Jacksonville beach.

News4Jax claims that a lifeguard had to jump in the ocean to save a man who was screaming for help.

There was “a lot of blood and within 10 feet he could see a 6- to 7-foot shadow of what could have been a shark in the water.”

The lifeguards carried the man whose leg was “pretty much in shreds” to shore, and a nurse was on the scene to help until paramedics arrived.

Note to self: Stay out of the ocean when on vacay in Florida!

To see the entire Jacksonville Shark Video, you can go HERE.