It’s ingrained in us, that need for romantic love and connection. It puts us on our best behavior during those early, get-to-know-you days and adds a rosy haze to our outlook, causing us to miss those early clouds forming over our new romance. Don’t get caught in a shit storm of what should’ve been your fairy tale horizon by wasting your time on a guy not worthy. Here are 10 signs your prince charming is actually a warty little toad. 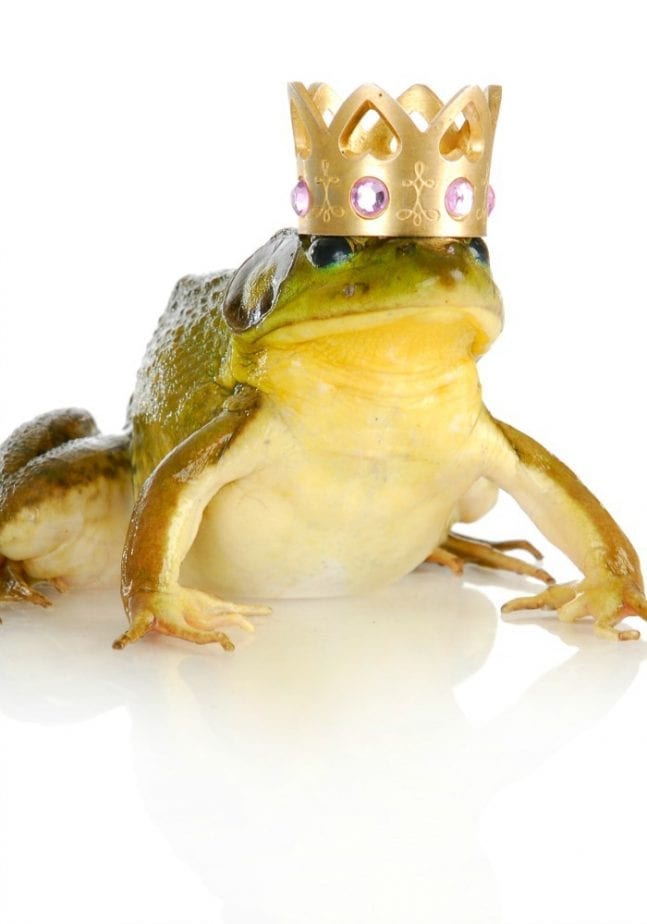 He Loves Me Not: 10 Signs Your Prince Charming Is Actually A Warty Little Toad

Six months into the relationship and it’s football tailgate season. Too many weekends of brats and beers has your jeans fitting a little snug. He comments, and not in a good “more of you to love” kind of way. This, sister, is a sign of what’s to come and that little comment won’t be his last. True love doesn’t judge. So if your guy is less Prince Charming and more Judgy McJudgerson, run. Literally. You can’t afford new jeans on a single girl paycheck. But drop the douche like a spare tire first. This ain’t cross-fit.

Yes, I know, everybody does. But I’m not talking about those little whites intended to spare someone’s feelings. I’m talking bigger picture.  Like that time he told you he had to work late because of an upcoming deadline. The work night that lasted until 2 a.m. when coincidentally the bar also closed? Or the time his car was “stolen” but really it was impounded for outstanding parking tickets? Nip this one in the bud, chicas. If your man feeds you string after string of lies, tell him buh-bye!

I’m not saying it’s his responsibility to pay all the time. At some point in your relationship you each need to pull your own weight and be partners. But if more often than not he allows you to pay, or worse, asks to borrow money from you, that’s a relationship ender. You neither want someone stingy, nor someone who makes poor financial choices.

4). He trash talks your friends.

But not to their faces of course. He wouldn’t be that rude. He just can’t understand why you continue to hang out with Jane when she’s such an obvious head case, or how you can still be friends with Jo when she lost your Tory Burch handbag she borrowed last year. See this for what it is. Manipulation and isolation. He’s a sheepdog trying to cut you out of the herd. You don’t need your girlfriends now that you have him. Lose him and keep the friends. They hold your hair when you puke and hide your phone when you’re tempted to drunk dial.

Your favorite song comes on the radio and you can barely contain yourself. You want to belt it out. But you can’t because you feel too self-conscious around him. If you aren’t comfortable doing you, you need to stop doing him.

Remember that time you were at that couples dinner party and you told the funny story about when you and your boyfriend babysat your three year old niece? He charmed you by being a good sport and played beauty shop with her, taking it all the way to make-up, hair and nails. It was a good time up until the precocious little stinker locked you both out of the house. While you were negotiating with the little terrorist, the really hot female neighbor stopped and between fits of laughter at both your expense, reminded you that she had a spare key to your sister’s house. In the moment the situation might have been terrifying. A three year old alone in a house with knives, a gas stove and daddy’s 70 inch flat screen is a recipe for disaster. But the bruises on your shins from your boyfriend kicking you under the table as you relayed the story to friends proves that even weeks after the incident turned out alright, he still doesn’t find it funny. And you do. Because it’s hilarious. Do yourself and him a favor. Set him free to find the prune sucking stoic his heart of hearts yearns for.

7). You are not the center of his universe. His cell phone is.

Look, I get it. We live in the information age and people in high-powered fields are expected to be “on” 24/7. So if the boss emails at 10:30 p.m. wanting to know where your boyfriend is on researching the issue they discussed during the conference call, it’s highly beneficial that he answers. But surely he can wait until after the main course is served and you’ve gone to relieve yourself of the three glasses of wine you drank with dinner. If this type of behavior has turned chronic in your dating relationship, run Forest run! This guy has already placed you on the bottom wrung of his priorities ladder.

While a relationship built on sex alone is probably doomed, if sex isn’t at least an important element, you’re doing it wrong. That doesn’t rid you girls of your own responsibility though. Your lady parts are not a magic 8 ball. He can’t shake you up or wiggle you around and expect every answer in the clitoral universe to appear. While he needs to be in tune with you and your body, you also have to be in tune with him. If you aren’t comfortable telling him and showing him what you want, how you want it and how often, your little man in the boat is destined to a life of solo excursions. You are the captain of your ship. It might be time to find a new first mate.

9). He owns more products than you do.

This by itself might not be cause for a duck and roll. But chances are, if he takes that much interest in his own grooming habits, he’s going to be holding a magnifying glass over yours.

Patience is a virtue and egg shells are no fun to walk on. If you find yourself living less than your authentic self for fear of his volatile reaction, make like the Road Runner and beep-beep on outta there.

Life is hard enough. We make it harder by wasting weeks, months, even years on unhealthy relationships. But life is also short and your Prince Charming does exist. Don’t allow true happiness to continue to allude you. Stop wasting your time on toads and get down with your own bad self.

i would really love to contribute. How can I do that?

Send an e-mail with a sample post to jamie@totallythebomb.com. I can't wait to read it!

Wow! Tracy I was really inspired by this. I broke up with my ex yesterday and feeling a little down but after reading that I gained confidence again and I am happy I threw in the towel