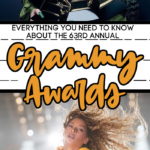 If you plan on watching the Grammy’s this Sunday, here is a run down of who, what, when, and where!

Most awards shows barely tell you who will be performing, they give you just a little information at a time. This year the Recording Academy announced everyone at one time so let’s get to it!

This will be the 63rd annual Grammy Awards! It’s being held at the Los Angeles Convention Center and hosted by Trevor Noah.

Beyoncé is this year’s top nominee, but as of right now she is not slated to perform at The Grammy’s. She has nine nods!

Taylor Swift, Dua Lipa, and Roddy Ricch are among this year’s top nominees and will be performing! Each of them has six nods!

The only performers on the list that are not current nominees are Cardi B and John Mayer. Everyone else is a nominee!

Artists will be coming together, while still safely apart, to play music for each other as a community and celebrate the music that unites us all.

The Grammys will air live on Sunday, March 14, at 8 p.m. ET/5 p.m. PT on CBS. You can also stream the show live and on-demand on Paramount+.

Who are you excited to see perform?