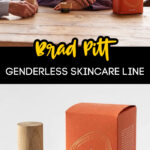 Brad Pitt has dipped his toes into the world of beauty by bringing us a genderless skincare line, and I have to try it — or at least trick my husband into using it!

There isn’t much out there that is more beautiful than Brad Pitt. You have to admit, he’s in the top 5 of most beautiful things on earth!!

It makes since that he would introduce his simple beauty regime in the form of genderless skincare which we can all copy.

According to CNN, “Le Domain” is a collaborative effort between Brad and the Perrin family of wine growers.

Key elements such as grapes and olive oil in the products have a 100% traceable origin. They are derived exclusively from the Perrin family’s lands and are also eco-extracted by natural means, by Le Domaine’s farmers.

Truthfully we wouldn’t have done it unless we felt there was something valid here, something original, something that worked. I get sent stuff all the time and… ugh. It’s just all the same for me. But this last year we have been testing Le Domaine and I was really surprised by the results, and that for me, made it worth going forward.

What sets this skincare line apart from the competition? “Le Domaine” uses a couple of patented active ingredients: GSM10 and ProGR3.

GSM10® is based on more than 10 years of research by Professor Teissedre on the grape varieties and marcs of the Perrin family. Made from a combination of marc from Grenache seeds, Syrah seeds and skins associated with a post-biotic micro-organism beneficial to the skin microbiome, it has a proven anti-oxidant and anti-MMPs (matrix metallo-proteinases, such as collagenase, which destroys collagen) effectiveness. Its effectiveness on skin balance has also been demonstrated.

ProGR3® is the result of research on progeria and its main mechanism: progerin toxicity. Combination of 3 natural molecules present in plant extracts, vine sarments, camomile and green tea, ProGR3 has scientifically demonstrated its efficacy on the toxicity of progerin, the marker protein of ageing. It allows to fight against the visible signs of skin ageing and thus age well.

The products in the “Le Domaine” line are a bit on the pricey side. But, you get what you pay for, RIGHT?!?

According to the “Le Domaine” website, the products range from $80 to $385. They also have refills, which are significantly more reasonably priced.

You won’t see Brad Pitt as “the face” of the skincare line, but you’ll know in your heart that he backs the products. LOL!!