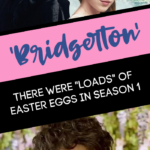 I’m so in love with Bridgerton, the Netflix original show AND the book series by Julia Quinn.

I am DYING. They have announced that there will DEFINITELY be a season 2 of Bridgerton — which, duh, there HAD to be, right?!?

Because I am obsessed with the show, I recently learned that Jonathan Bailey, who plays Anthony Bridgerton in the show, has gone on record saying “there’s loads of little Easter eggs (that point to season 2) for all of the characters (in the show),” and he would know!!

We have already guessed that — SPOILER ALERT — the bee in the final episode of the season is a foreshadowing of what’s to come in the future of the show.

But apparently, there’s even more!!

Earlier this month, while Jonathan Bailey was doing an interview with British Vogue, he dropped a few hints about what we might see in the “ton” during the second season.

Well, I feel like the campy, plush spectacle of the Bridgerton world is only going to get more pronounced in the best way possible. It’s mad, and it’s brilliant.

It IS a brilliant show, isn’t it?! It’s one of the best shows currently out there, not only in Netflix-land, but in the REST of the streaming — or cable — world.

There are also going to be a lot of brilliant characters introduced in this series–and it’s not just Anthony that we’re going to delve into.

The robust universe that’s been set up by Shonda [Rhimes] and Chris [Van Dusen] will just expand and keep pushing boundaries in a way that’s quietly subversive.

I really would expect nothing less from this show! Shonda Rhimes definitely has another winner on her hands.

There’s just going to be more of what everyone loves, I think.

But, what about those Easter eggs you mentioned??

Well, Jonathan wouldn’t go into detail — spoil sport!! — but he DID confirm that the bee, from episode 8, is going to be an important part in the future of Bridgerton.

Guess it’s time to watch the entire season of Bridgerton again — for the third time — and see if I can catch more of those Easter eggs that Jonathan Bailey spoke about. LOL!!

(That last picture doesn’t really fit in anywhere with this post, I just thought you might want to see a nice picture of the Duke of Hastings. You’re welcome!!)