Since the Friday of Pokemon Go’s release my housemate (aka The Boyfriend), and I have been on the go almost constantly in an effort to “catch them all.” We are those adults out at 1 or 2 in the morning, clustered in a parking lot with a dozen other strangers trying to snag something we haven’t seen before. It’s no surprise that given the game’s sudden popularity that there are people who don’t care, don’t get the game or totally hate it.

For the people who don’t care or don’t get it and casually keep scrolling by all the updates on what Pokemon were caught where and who got to what level, kudos to you. You are a great example of a human being.

My beef isn’t with you.

It’s with those who have to follow up every excited post with a negative comment or fill the ether with negative memes, comments or loud grumbling. Seriously, in the time the game has been out so far I’ve had random strangers complain about us to other restaurant patrons (where we were also paying for food and drinks btw), security guards stopping their work to hassle me, and random internet people messaging me to tell me how much they hate the game and what I’m doing.

This, this is for you people.

Some of the complaints about the game involve people being super engrossed in their phones. That it’s not socializing. I beg to differ.

Pokemon Go is getting people to socialize! 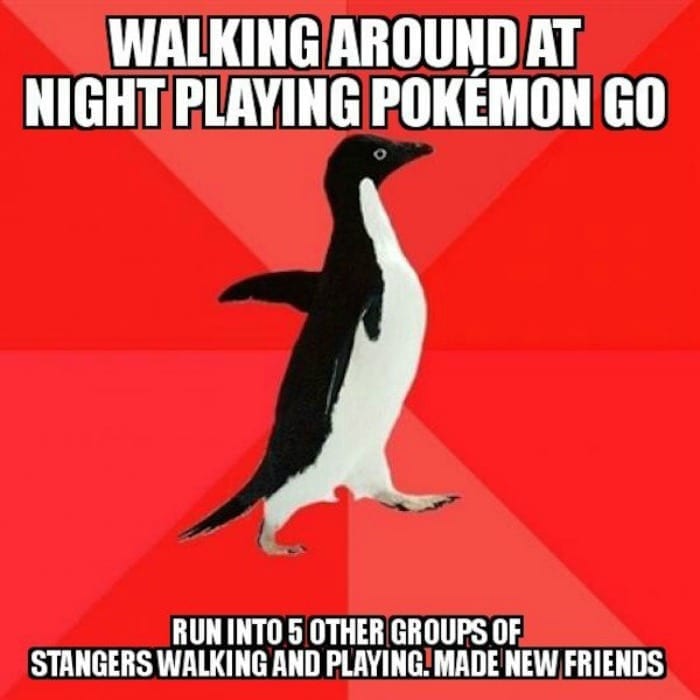 On our first big night out hunting I wound up standing around a light pole with four other girls. Girl 1 said she wanted to go over to this one spot across the street and down the block because she’d heard there was a good spawning location there, but she was alone. If I hadn’t been there with my own group I’d have been all over that, but instead I gave her my number so we could later go out in a Girl Group. Girls 2, 3 and 4 were also there alone. All five of us traded phone numbers. Which means… I have four new friends. And haters, how many new friends do you have? -1, because you can count me out.

Last night we went out to the park. My goal was to walk laps so I could hatch an egg and I started out on my own. Keep in mind there are hundreds of people out there, so I’m by no means alone. During my walk I pass all sorts of people. Kids. Teens. Adults. Grandparents. Cat people. Dog people. Goths. Preppy dudes. Jocks. Hipsters. You name it–we’re out there doing this super fun activity. At one point I was admittedly more engrossed in getting the thing I was after than who was around me. Yes, that’s not awesome but a) well-lit place b) lots of people c) cops within hollaring distance.

This guy walks over and says, “Excuse me, miss?”

He then smiles and apologizes, he was a really cool dude, and asks what team I’m on. Turns out we’re both Team Valor and he, his group of friends, plus a few pre-teen kids are trying to take out this gym. For the next ten minutes we took turns battling the gym and doing our best to take it over and between battles we laughed, talked and got to know each other. To me, this is an excellent example of showing that people aren’t just who they appear to be. Here you had some rather rough looking guys, …uh…me and whatever I look like, and a couple normal pre-teens hanging out. The guys were super cool and two paused the game to tell the kids the importance of staying in school and not making their mistakes, I chimed in on the difference that sticking with school can make a difference, and we had a great time. (We also took over that gym!)

Pokemon Go is getting people to exercise! 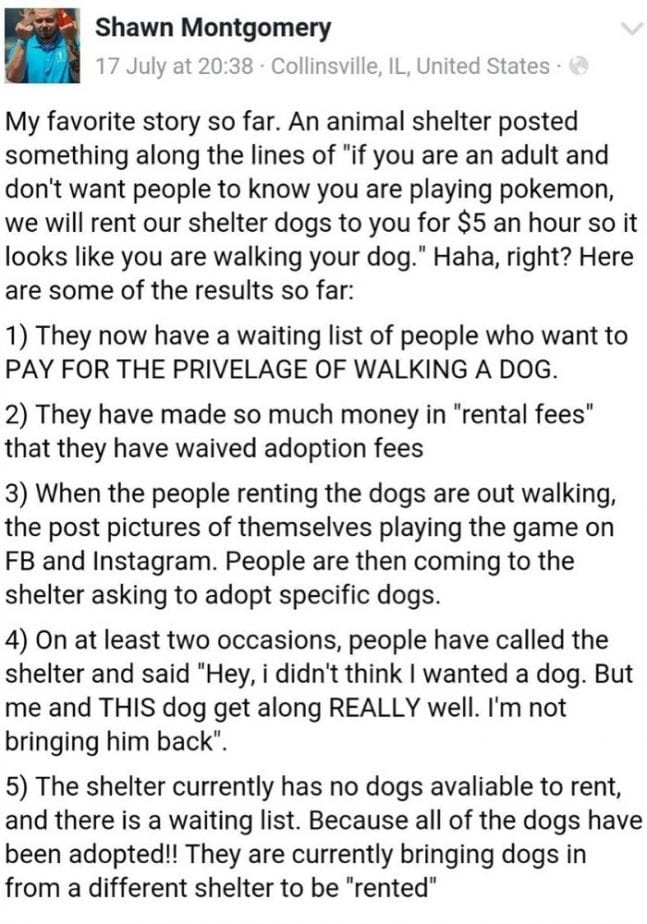 There’s some conspiracy theories that the initial game development was funded by government health agencies. I haven’t looked into it. I don’t know that for sure. But what I do know is that instead of sitting on our sofa and binge watching the latest season of Vikings, my friends and I are out roaming parking lots, moving, exercising, squeezing in a quick 1K walk in an effort to get more Pokemon. The game has made exercising fun for a lot of us. I’ve begun to chart my weight and time spent walking in my planner, and though the results aren’t there yet, I have a feeling they will be.

And we aren’t the only one!

Our local Pokemon Go group is discussing good stretching, proper hydration and how to treat sore muscles. Because many of the people participating have never exercised before. And they now need to learn how to treat their bodies, how to stretch and how to care for themselves in a new way.

For us nerds, this is a big deal. I can’t set foot inside a physical gym without having an anxiety attack thanks to the hazing I experienced in high school. I’m downright terrified I’m going to end up with another broken nose and a black eye. So yes, having a physical activity I enjoy to this degree is huge! I actually just got a backpack from my mother that has a water bag inside it so I can carry more water and make fewer stops when I’m out walking.

Pokemon Go is what’s wrong with the world! 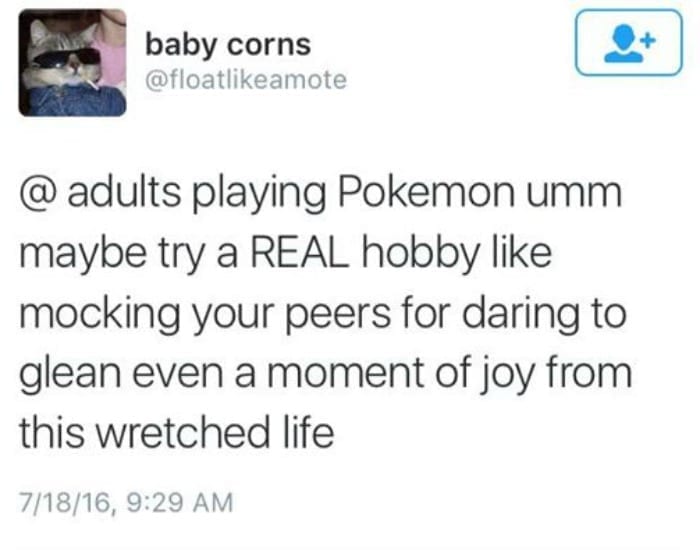 A lot of adults like to display just how much they don’t know by using that statement. You want to know why?

So the only answer to that argument is, uh, no. Pokemon Go is likely to make the world a better place. I know that sounds silly, but I’ve seen people clustered around lures talking about this or that political figure, people debating with passion and facts instead of memes and jokes. Individuals who wouldn’t have spoken or shared information before are freely communicating and starting to see things from the other side.

Case in point, just the other night a middle aged white guy was hanging out at a lure. One of my earlier Team Valor gym buddies was there. You can’t get more dissimilar. Add in a couple non-white teenagers, myself and a few other adults and we started chatting about some local legislation that was bugging us. As a new home owner there’s a world of WTF I was unaware of before now. As we discussed the matter the middle aged white guy edged closer. He asked a few questions, but mostly just observed our conversation. At the end, when he had to go, he paused to thank us for our thoughts. Turns out he’s one of our city’s top elected officials and he’d just had a very enlightening moment listening to us, average citizens, discuss how his choices were making our lives harder.

So yes, Pokemon Go is changing things, and I believe it’s for the better.

Awesome post! My daughters have been playing and I, for one, think it's a good thing too. My older daughter is somewhat of a homebody, but this has gotten her out with friends and having fun. They have also talked with other people of different age groups and race and worked together to defeat gyms. I think it's a great activity as long as you stay smart and alert. Thanks for posting this!!

LOVE this post! It's funny, because I first saw it while I was out with my youngest hunting and had to share. I've gotten in some pretty heated debates with people who seem to think this game is the most horrible thing ever.

Not a single one has a solid reason as to why. Those who mock are just as clueless. It seems to be a new hobby to make fun of people making fun of those enjoying something they don't.

What is new is it's not just kids who might give it up because of peer pressure. The boundaries of age and color and beliefs being broken means there's too many that do enjoy it for the 'cool factor' to matter.

My eldest has a lot of social problems and this is helping her ease into public settings. If for no other reason, that alone would make this game one of the best things to ever happen.

Great post - I play PokemonGo and I am not ashamed. My sister and I go at night (I am on the East Coast so it is light out until at least 9pm) so we take advantage and walk around the neighborhood "hunting." We are having a good time and it also gives us time to gossip, catch up and share a few laughs. We don't do it everyday or all the time but we sort of schedule a few days in advance when we are going. We have even taken my mom for walks with us while we play, we laugh and laugh with those who finds it funny that 2 adult women are playing PokemonGo. Like I usually tell them, no shame in my game!