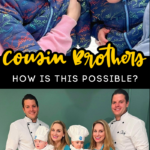 I’ll tell you what happens — their children become not only cousins, but they become “genetic siblings.” Like, literally, if they were to take a DNA test, it would show that they are genetically siblings.

Crazy, huh!! It sounds like the plot to a book or movie.

The quartet met at a Twins Days Festival held in Twinsburg, Ohio in 2017. A mere six months later, they were married.

The Twin brothers married the twin sisters — and they even had a joint wedding in 2018!

Their wedding ceremony officiated by twin priests and featuring twin ring bearers was held at the same festival a year later.

And, wait for this bombshell — they all live together in one house in Virginia!!

You might be thinking, “Cool, they each have a section of the house.” You would be wrong.

Instead of two separate households, Brittany, Josh, Briana, and Jeremy consider themselves to be one family unit. As Jeremy told the outlet, they frequently respond to queries about their lifestyle — but most of the feedback they get is positive.

Not only all of that — but the sisters got pregnant at the same time, and both couples had baby boys — Little Jax and Jett.

I’m trying to work this out in my brain. They can’t be identical twins, because they didn’t share the same amniotic sac during pregnancy.

But, would they be genetic fraternal twins? They are genetic brothers, and each had their own amniotic sac in the womb. Does it matter if the parents are different?

This is just wild!!

From a genealogical (not to mention, legal) point of view, any offspring would technically be considered first cousins, but their DNA would be hard to distinguish from that of full genetic siblings. Furthermore, it would be almost impossible to figure out who the biological parents are based on the DNA alone.

Incidentally Briana and Brittany are on a TLC show called Extreme Sisters, which airs every Sunday night at 10pm EST. Check it out to learn more about this unique family.