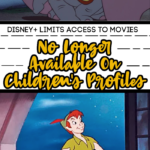 I think I’m a pretty good and decent person and I grew up with a ton of stuff that people are trying to cancel, or have canceled. Like people want ‘Grease’ banned… huh?

Children’s movies that I grew up with and my own kids grew up with are being looked at in a different way. They’re being labeled with negative stereotypes.

I’m the type of person that just doesn’t watch what I don’t like. Like ‘Caillou‘, heck to the no, none of that was playing at my house. Another that we didn’t watch was ‘Rugrats’, but I didn’t tell other people not to watch it.

Disney+ has removed several movies from children’s profiles on its service. Movies that I never would have dreamed would be labeled as negative, they’re classics.

However, you can still access the movies from the Disney+ service, just not with the children’s account. So, you still have a choice and they have not been completely removed or canceled.

Which films are included

The movies that have been removed from the children’s profiles on Disney+ are the following:

As I said, you can still access them on Disney+. However, there is a content warning that reads as follows…

This program includes negative depictions and/or mistreatment of people or cultures. These stereotypes were wrong then and are wrong now. Rather than remove this content, we want to acknowledge its harmful impact, learn from it and spark conversation to create a more inclusive future together. Disney is committed to creating stories with inspirational and aspirational themes that reflect the rich diversity of the human experience around the globe.

‘The Aristocats’ happens to be a favorite at our home. We own all of these movies and my kids love them.

We have some really dumb people that are easly offended. They need to get a life and realize that everything does not resolve around them. You don't like it don't watch it. I don't like rap music it promotes hate, race,and violence. So I don't listen to it. You want all of us that don't like it to get up in arms and have it band? Man there would be more riots than we would no what do do with. They love that hate music.

What!! That’s crazy these were good disney movies. What I didn’t like is South Park those ugly words they used. Kids shows of any kind shouldn’t have bad words in it.

This the most ridiculous thing!! So many entitled little brats that whine!! First off all these Disney movies were created for adults and books not children!! Second stop tearing what our ancestors created and grow up!! Disney taken stuff down, Mr Potatoe Head not good enough for everyone!! It’s a damn plastic toy!! Dr. Seuss books being taken down!! It’s called the first amendment gawd!!

This is the stupidest thing I people are looking way to into movies. Things are not as bad as some people think they are. We grew up watching them and we are not all messed up. So they need to worry about the real problems we have in the world.

Maybe people need to stop watching all Disney shower, cartoon, Disney channel, anything to do with Disney. This is so stupid and getting out of control.