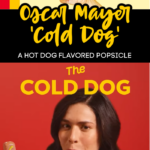 Y’all, this is August… we are well past April Fool’s Day and this is not the joke I assumed it to be.

Oscar Mayer truly did release a hot dog flavored popsicle that even has a drizzle of mustard on it.

I’m totally grossed out, but I know that there are people that would totally be down for eating this monstrosity creation… and I have to know what is wrong with them, ew.

It’s said to have a smokey flavor along with notes of the Oscar Mayer classic wiener.

After the overwhelming fan excitement for our beloved Cold Dog, it was a no-brainer to make this hot dog-inspired frozen pop a reality.

Oscar Mayer says that thousands of people voted that this idea was genius… huh?

If you are in New York City or the Jersey Shore you can keep your eyes peeled for the Wienermobile that will also offer the Oscar Mayer Cold Dog.