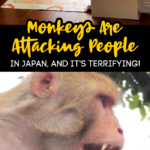 Let me start this off by saying that I was attacked by a monkey as a child and have a huge fear when it comes to these creatures.

People usually laugh when I tell them that I’m afraid of monkeys and that one literally attempted to eat me as a child.

Japanese macaque monkeys have coexisted alongside humans since the Edo period – Japan is very mountainous and communities live close to mountains where monkeys live, so it is easy for monkeys to enter villages and towns,

Well, now a city in Japan is under attack and the attackers are monkeys and I bet no one is laughing now!

At first, they thought they had one crazy monkey out there attacking people, but as the number of attacks has risen, they now believe it is more than one monkey.

These attacks are not just happening outdoors, nope… they are coming into homes and even schools to attack unsuspecting people.

This is a very unusual occurrence; they have never come into an urban area like this before and assaulted this many people.

Masato Saito, an official from the Yamaguchi city hall – CNN

People of all ages have been the victims of the terrorizing monkeys, including children!

At least 45 people have been attacked and injured since July 8th by Japanese macaques in and near Yamaguchi city.

This is scarier than any horror movie in my opinion, and I will not be visiting Japan anytime soon!