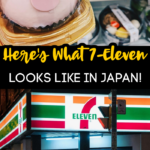 If you can remember the last time you visited a 7-Eleven, it may have looked like several long aisles stocked with chips, beef jerky, and energy drinks.

Thanks to one Tokyo-based TikToker named Alisa who shared what 7-Eleven stores look like in Japan, the differences between the convenance stores in Japan versus in the U.S. are outstanding.

The video which mainly focused on breakfast and a few other stocked foods has drawn in nearly three million views and counting.

And let’s not forget about the ready-made meals and the baked bread aisle which included mouth-watering stuffed sandwiches and chocolate chip breadsticks!

As the TikToker was choosing a meal to eat for breakfast, she picks from several pre-packed smoothies made with all-natural ingredients and selects the banana with kale.

After putting the pre-packed drink in a machine that blends it for you, the video ends with Alisa happily walking away with a perfectly blended green smoothie; and one that coincidentally matched her outfit!

TikTokers were quick to comment on their fascination by the 7-Eleven tour, comparing the differences between Japans and the ones located in the United States.