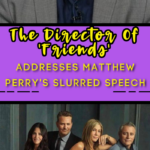 Since the ‘Friends’ reunion, fans of the show have grabbed the tissue box and walked down memory lane but since the gang has got back together, tears of joy have also turned into concern for some.

Ben Winston, the director of Friends: The Reunion addresses the moments where Matthew Perry’s speech is slurred on camera and according to an interview with the Hollywood Reporter, the director has defended the celebrity.

“Yes, he was great. People can sometimes just be unkind. I wish they weren’t. I loved working with him. He’s a brilliantly funny man and I thought he had some great one-liners in the show. I felt just happy and lucky to be in his presence and directing him on something like this.”

While the director has defended Perry against some of the unkind comments from individuals who caught the actor slurring his speech, Perry (aka Chandler) has yet to go public with a statement on why it happened.

With that being said, according to an insider who revealed to The Sun, the slurred speech was caused by an emergency dental procedure which was performed on the day of filming and not by drugs, which fans of the show were originally worried about.

“Matthew turned up to the reunion and members of his team said that he had an emergency tooth procedure that day. That was said to impact his wellbeing and also how he was feeling. He had been in pain from what we understand, which caused the slurred speech. “

As we all know, Perry has been outspoken regarding his struggles with addictions in the past which started after a jet ski accident in 1997 that left him addicted Vicodin, a painkiller.

Since the accident, the actor has checked into rehab twice for severe drug and alcohol addiction and since receiving treatment, Perry has been sober for several years and seems to be doing just fine; fans of ‘Friends’ can take a deep breath in now.