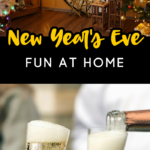 It’s almost New Year’s Eve, and that means it’s time to plan out what the heck you’re going to do.

Why not host a fun night at your house — with either your family or your friends. It’s totally easy to have a fun New Year’s Eve in the comfort of your own home with a few fun traditions to make it special.

How To Enjoy New Year’s Eve At Home

1. Everybody dress up — This could go several different ways. Either dress all fancy, in your nicest clothes, jewelry, and done-up hairdo, or dress in matching jammies. You could even have a fun masquerade night at home!

2. Watch Dick Clark’s New Year’s Rockin’ Eve — Duh. This is a no-brainer! It’s a tradition that so many of us have. Turn on that TV, and watch the musical entertainment until that ball drops.

3. Even if it’s just your family, make a bunch of finger foods — It’s so much fun to just pig out and enjoy tons of different appetizer-y type foods.

4. Watch movies until the big moment hits at 11:59pm — Pick a favorite couple movies, and watch them together as a family or with your friends. Maybe a classic like When Harry Met Sally (they celebrate New Year’s, right?!?).

5. Have poppers of confetti — Get some confetti poppers (or they’re sometimes called confetti cannons), and pass them out to everyone at the house. When that ball drops, everyone fill the room with popped confetti!

6. Do those New Year’s Eve traditions — Make sure you eat that “lucky” food. Stand on your left foot until the ball drops, then move to your right foot (starting the year off on the right foot!). In the Philippines, they dress in polka dots on New Year’s Eve to bring them luck. In Brazil, everyone wears white to bring on the good luck vibes.

9. Sip on Hot Chocolate and Cider until midnight — Because it’s yummy!!

10. Write down those New Year’s Resolutions — You know you have them. Write them out on a sheet of paper, and then put it somewhere you can see it often. I put mine in my sock drawer. This helps you remember what you have planned to do, and stick with it!

11. Splurge on that fancy champagne or sparkling wine for the adults and sparkling apple juice for the kiddos — If there’s one time to NOT get the cheap stuff, this is it!! Make it special, and splurge just a bit. By the way — Martinelli’s Sparkling Apple Cider is the BEST!!

13. Kiss your loved one at midnight — “According to English and German folklore, the first person you encounter in a new year — and the nature of this encounter — sets the tone for the rest of the year.” Make it count, people!