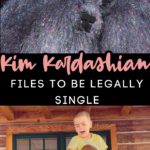 Despite Kanye’s desperate attempts and all of the rumors circling, Kim Kardashian has made it officially clear that she has zero desire to be with him.

Kim has filed documents to make herself “legally single” in an attempt to proceed with the divorce with Kanye. She had been working on getting a divorce since February, but Kanye and his team have been unresponsive.

“Irreconcilable differences have existed and continue to exist between [West] and me, which have caused our marriage to irretrievably break down. No counseling or reconciliation effort will be of any value at this time.…[West] and I both deserve the opportunity to build new lives. Therefore, I am asking that my request to bifurcate and terminate our marital status be granted.”

These files came just days after Kanye publicly changed his lyrics of “Runaway” to “I need you to run right back, baby, more specifically, Kimberly.”

Hopefully he will start cooperating and release her from their marriage so they can both move on.