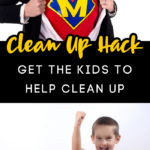 Am I the only one who struggles to get her kids to clean up ANYTHING?

I’m talking about their laundry, their dishes at dinner, their towels in the bathroom, plates and trash in their rooms, and the list goes on.

I have tried just about everything, and I usually just resort to cleaning it up myself to avoid the fights and hassle.

But, I found a hack that just may work.

Sure, it’s a bit of a devious trick, but hey, sometimes a momma has to play a little dirty to get things done.

Here is how this cleanup hack works.

Thanks to @mr.stitchem on TikTok for bringing this hack to our attention.

How often do you ask the kids to clean up after themselves, and they may pick up one or two things, but that’s about the extent of the help you get.

With my kids, they fight over who is responsible for picking up more things, and they eventually just basically refuse to do their share until the other does THEIR share — which they never do.

So, instead of just asking the kids to do their part in picking things up, stop and rephrase your thinking. Think like a kid. LOL!

Tell them that they can do something they want to do (TV, video games, or even just take a break) as soon as the three “magic pieces” are picked up.

Watch your kids spring into action.

While they are rushing around to clean things up, randomly say, “Ah Natalie just picked up one of the magic pieces. Two more to go.”

Of course, change the name “Natalie” to the name of your kid. LOL!

You want to randomly “acknowledge” when the second “magic piece” has been picked up.

Then, when EVERYTHING is picked up, say something like, “You did it!! You got the last magic piece.”

You go let them do their promised activity, and you relish the fact that you just had them help you clean up!

Now, go trick those kids into helping you pick up. Ha! Here’s to a clean house!!