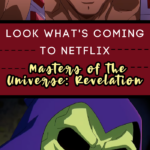 Talk about nostalgia coming back to slap us in the face!!

40 years after He-Man first appeared on just about every television in the United States, he is bringing the power BACK to Eternia, and this is going to be EPIC!!

There is going to be a NEW animated He-Man television show — none of this live-action crap that EVERYONE is into lately. LOL!

The show is aptly named Masters of the Universe: Revelation, and it is set to occur immediately after the events of the OG He-Man cartoon.

It kicks off with a climactic battle between He-Man (Chris Wood) and Skeletor, as teased in the footage, that fractures Eternia and leaves the Guardians of Grayskull scattered.

Kevin Smith is the co-creator and show-runner of this series — which makes me giddy!

Smith — whose works include Clerks, Mallrats, and Chasing Amy — has been a long-time fanboy of everything comic books and classic cartoons — basically, if you can find it at Comic-Con, he is into it.

I can’t think of a BETTER person to bring the classic He-Man versus Skeletor battles back to life!

All the original He-Man hard-hitters are back this second time around: Evil-Lyn, Teela, Cringer, Orko,Tri-Klops — He-Man and Skeletor, of course — and many more.

Now, let’s be very clear — this is NOT a remake of He-Man, but a brand-spanking-new series, with episodes you have never before seen.

Since this is a sequel series, the main mythos remains intact. Prince Adam, the son of the ruling family of the realm of Eternia, uses the Sword of Power to transform into the chiseled He-Man (you know, “I have the powah!”) to defend his kingdom from threats — mostly from Skeletor and his forces.

If you don’t have Netflix, now is the time to sign up, because Masters of the Universe: Revelation is going to be a part of the streaming network’s catalogue of programs and movies.

Netflix announced that, on JULY 23rd, the first FIVE episodes of this new He-Man series will drop — and this will constitute Part 1!

Not only that, after the first show airs (on July 23rd) there will be an AFTERSHOW — an afterparty, if you will!

Kevin Smith will host, and there will be appearances by many of the cast who voice the characters — Mark Hamill, Chris Wood, Jason (Jay) Mewes, Henry Rollins, and many more.

This is something that every He-Man fan will NOT want to miss!

You can see the trailer for the new Masters of the Universe: Revelation series HERE.