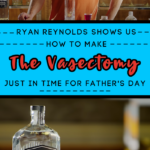 In a commercial full of rather dry humor — kinda like the gin itself — Ryan Reynolds shows the world how to make a special cocktail just for the Father’s Day holiday!

Now, he may be rather biased, because he was the owner and creative director of Aviation American Gin, but he calls this creation the “Mother of All Cocktails “– a drink that is as “refreshing as fatherhood.”

What is the NAME of this yummy drink?

You might be wondering WHY on earth is it called The Vasectomy?

As Ryan explains in the commercial, it’s called The Vasectomy for “no f***ing reason at all.” LOL!

How Do You Make The Vasectomy?

According to the commercial, there are several steps to making this drink.*

First, you fill a tall glass with ice “the way children fill our lives with so much joy.”

Try your best not to spill that ice everywhere.

Then you pour in 1 ounce of cranberry juice, “sweet, just like their little smiles” — I just eyeball it!! LOL!

Next, pour in 3 ounces of tonic — I might use LaCroix Cran-Raspberry sparkling water.

The next step is to give the drink a squeeze of fresh lemon juice, or store-bought “if the little ones have you running around a bit today, the little scamps.”

Stir that bad boy up, and then garnish “with a little slice of sunshine.”

Mmmm. Now THAT is as refreshing as fatherhood.

Happy Father’s Day to all the dads out there, and drink responsibly!!

*All quotes are by Ryan Reynolds in the Aviation Gin Commercial.