The day after Halloween my coworker put up her Christmas tree. I was like, “Ha ha, what a weirdo.” In my head. I’m not a butthole. Then another coworker chimed in that she’d put hers up, too. AND she was going over to her mother’s house that night to help HER put up her tree. On. November. FIRST.

Do you realize what that means? There will be a Christmas tree festooned with lights and tinsel hanging out in the living room when the family has all gathered together to celebrate…Thanksgiving.

Guys, we have lost our goddamned minds. It’s one thing to tolerate retail stores putting up Christmas decorations in September, but WE don’t have to. Christmas is DEVOURING the last third of our year. And you know what? It’s making Halloween and Thanksgiving less special.

The Perils Of Christmas Creep

Halloween decorations are showing up in August and disappearing by the middle of October. The good ones, anyway. And poor Thanksgiving is just like…practice Christmas. Like a food dress rehearsal but without the jolly white bearded star.

When I got married, my husband who is a holiday humbug, made me promise to wait to put up Christmas decorations until December 1st. Then I could go nuts with the tinsel. And I do. But today I found myself at work, surrounded by Christmas decorations and I almost had a panic attack. My halls aren’t even close to decked because my boughs of holly are still boxed up in the attic. It’s December 2nd and I feel like I’ve already missed Christmas.

I get that how we celebrate Christmas changes a little from generation to generation. In my grandparents day an orange was an appropriate Christmas gift. In THEIR grandparents day, putting up the mistletoe before December 24th made you a perv. So how the hell can Christmas stay special if you leave your tree up ALL FREAKING YEAR?

Yes, yes. It’s your house. You can decorate how you want. And Christmas trees are a pain in the patooty to put up and take down. I’m guilty of leaving a Christmas tree up almost all year. I didn’t even bother to change out the decorations. It just hung out in the living room, its lower branches being slowly stripped by my dumb cat who seemed to think it was a real tree. I had a crisis, though, when it was decided that we’d have Thanksgiving at my house that year. I just could not have that Christmas tree up. I took it down, packed it away, then drug it back out a week later. Because, goddamnit, a Christmas tree on Thanksgiving is insane.

Christmas has a long history of holiday creep. It used to be a two day affair celebrated by the rich. Then Queen Victoria put up a Christmas tree and a mere 20 years later every house in England and America put up trees like it was something they’d been doing since the day Jesus was born.

If we keep letting Christmas seep out into the rest of the year eventually it’s going to be a snake that eats it’s own tail. Then we’ll have jolly old Saint Nick co-hosting Saint Valentine’s Day, and I just don’t like peppermint chocolate all that much. 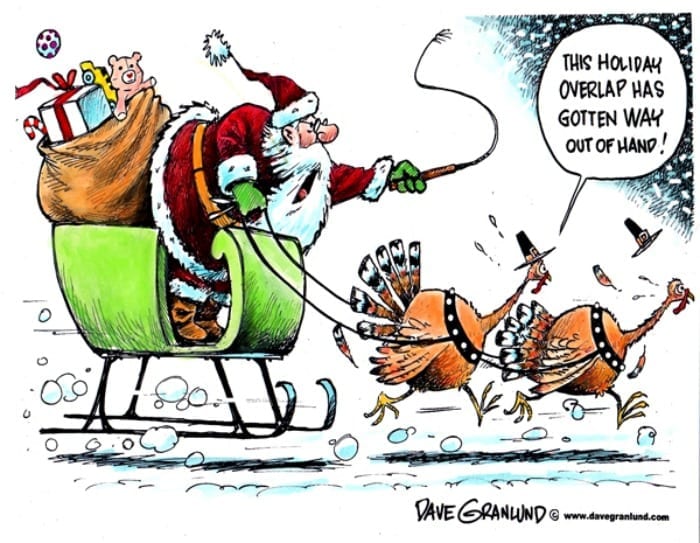