The Pringles Fried Onion Ring Flavor Is Back And I Am On My Way To Get Some! 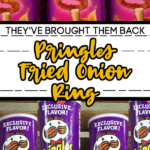 Pringles, the chip that once you pop, you ca’t stop. It’s true too, I always think I’ll have just a few and before I know it the entire can is nearly gone.

They always have amazing flavors that come out every once in a while. One of my daughter Lauren’s favorites is the Chicken Ramen Pringles, then they disappeared.

My personal favorite is the Honey Mustard Pringles! Have you tried it? It sounds weird, but it is so good!

Well, I just found out that the Pringles just brought back another favorite! It came out way back in 2019 and it’s back!

Pringles Fried Onion Ring! They taste just want they sound like too, just like a real fried onion ring, perfect to eat at your next cookout with a burger!

Some people are saying they taste so much like an onion ring that they want to dip them in ketchup! I don’t know that I would take it that far.

The last time they released this flavor it was only available at 7-Eleven as an exclusive. This time around they have been spotted at Walmart.

I checked Kroger’s website and I don’t see them there, however. So at this point, I’m not sure if they’ll be exclusive to Walmart or if they just haven’t been released in other stores yet.

1 shares
People Are Using This Special Spray To Get Rid of Invasive Tress and It Is Genius
← Previous
You Can Plant Flowers That Look Like Little Naked Men
Next →
Click here to cancel reply.