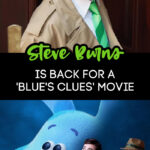 Blue’s Clues is bursting onto the movie scene with a live-action film, and — wait for it — Steve will be there.

Gah! My grown-ass adult heart is so happy right now!

Now, Steve had pretty much disappeared over the years. He just took off for “college,” leaving all his “friends” high and dry.

Then, out of nowhere, he magically appeared in a Twitter video earlier this year, telling us how much he missed us.

I guess I just wanted to say that, after all these years, I never forgot you — ever.

If that didn’t have you tearing up and hanging out in your nostalgic feels, you just might be dead inside.

But now, Steve — and Josh and Joe — have surprised us all by showing up in a trailer for the new live-action Blue’s Big City Adventure. And, if you don’t think me butt is going to be watching — well, you’re wrong!

In the movie, Blue’s Big City Adventure, Josh and Blue have left the Handy Dandy Notebook at home while they have gone to explore the “Big Apple.”

Now, they are lost in the Big City, and don’t know what to do.

Tickety Tock, Slippery Soap, and Mr. Salt show up at Steve’s door to ask him to help get the Notebook back to Josh.

Don’t worry! Steve is on the case!

I mean, it doesn’t get any better than that, AMRITE?!?

Now, Joe — the host that appeared after Steve but before Josh — is also in the movie. So, this marks the first time that all three Blue’s Clues hosts have joined together for one big adventure.

Let me just tell you — I don’t have Paramount+. But, you can damn sure guarantee that I’m about to sign up!

Get ready to gather ’round your television sets, grab your Handy Dandy Notebooks, and watch Steve help save the day in Blue’s Big City Adventure!

You can see the trailer for the Blue’s Clues movie below.