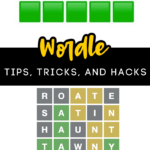 If you haven’t yet dipped your toes into the world that is Wordle, you are definitely behind on the times, my friend.

All you have to do is open up any social media platform to undoubtedly see something about this mind bending word game. It’s all anyone is talking about.

Wordle has taken the world of social media by storm, and has infiltrated the minds of society with its addictive and outright fun gameplay.

It is a word solving game that takes a bit of knowledge, a sprinkling of creativity, a little logic, and just a touch of luck.

The creative geniuses that are behind Wordle definitely know how to keep you coming back for more.

There is only ONE puzzle each day. If you jump on social media anytime before you try to go solve the daily puzzle, you will probably stumble upon some spoilers for that day’s puzzle.

How Do You Play Wordle?

Wordle is, perhaps, one of the easiest — in theory — games to play.

When you first open up the Wordle webpage, you are greeted with a grid of sorts. There are 5 boxes across and 6 boxes down, with a virtual keyboard hanging out below the puzzle.

You just choose a word. ANY five letter word. It could be Favor, Audio, Pound, Media, Point, Alien, Touch — you get the point.

You get six guesses in total in order to figure out the “Wordle of the day.” This may sound easy — and truthfully, sometimes it is.

But, there are SOME days when you will need all six guesses, and you will be sweating it toward the end.

What Do You Do After You Guess Your First Word In Wordle?

After you guess your first word and hit enter, the tiles will “turn” over.

Now there will be three different colored tiles. Some of them will turn gray, some will turn gold, and the best thing that can happen is for the tiles to turn green.

A gray tile means that the letter you chose is nowhere in the Wordle of the day. It will also be grayed out on the keyboard that is below the grid.

If a tile turns gold, that is a good thing. It means that the letter you guessed is somewhere in the Wordle of the day. But, you have it in the incorrect position.

The color you want to see is green. A green tile means that, not only is the letter you chose correct, it is in the right position for the Wordle of the day.

Then you use logic, deduction, and — if you’re desperate — maybe a little help from Google to figure out words that have the right combination of letters.

How Do You Win At Wordle?

The goal is to get all green tiles. That means you have correctly guessed the Wordle of the Day.

You can now celebrate and brag to your friends about how incredibly smart — and perhaps lucky — you are.

Tips, Tricks, and Hacks To Win At Wordle

Now, you don’t want to cheat, because cheating kind of defeats the purpose of playing the game.

BUT, there are some tips and tricks to help you get to that magic word that turns all the tiles green.

It can. But you want to think logically. Choose a word with at least two vowels and letters you find used most frequently in words.

From my time watching Wheel Of Fortune with my grandmother, I know that some good letters to choose are words that contain “R,” “S,” “T,” “L,” and “N.”

Guessing the letters most frequently used will give you a better chance for gold and green tiles.

Trust me, I KNOW this is easier said than done. You will inevitably get frustrated, and want to guess a word that contains letters that have already been eliminated.

Just don’t do it. Stay strong, and keep racking your brain for different words.

Of course, to actually submit a guess, you have to hit the “Enter” button. But, you can fill in the blocks with letters to help you brainstorm, and then hit the “Backspace” button to undo those letters before you hit enter.

Sometimes, being able to see the word will help you make a decision as to whether you have a good guess or a dud.

It is true, some of the Wordles of the day have been words that have multiples of the same letter — like boost, stops, abbey, gorge, and truss.

Unless you are 100% certain, however, that you know the answer in your first three guesses, don’t pick a word that has repeated letters.

Why? You want to get the most play out of your guesses as possible. The more letters you can eliminate — or guess correctly — the better.

Yes, it’s possible that the correct word is one you don’t use that often. But, more times than not, the answer will be a common word that you are well aware exists. They don’t typically choose words that are too out of the norm.

For instance — “Roate” is, in fact, a word. Your spellcheck will tell you it’s wrong every time, but I promise, it’s a word. It’s not a COMMON word though, so Wordle probably will never have it as one of the Wordles of the day.

They aren’t trying to trick you — really. They are just using logical answers that you will be able to guess.

Have you ever played Sudoku? It is kind of the same logic.

Don’t guess answers that have the letter in one of the slots that you KNOW it doesn’t go in.

Does that make sense?

You can do it!! It’s a super fun game that will keep your brain hopping from day to day.

To play, just go to the Wordle website, and start guessing. You get one puzzle per day, and six guesses per puzzle.