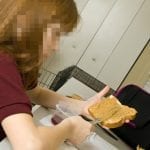 An unnamed Texas woman is being criticized for feeding her daughter a shocking amount of bread each month – over 100 slices.

She defends this strange diet saying, “My daughter is growing like a weed and her doctor thinks she’s healthy, so what’s wrong with that?” Before she started this diet, the woman says her daughter was picky and would rarely eat the food placed in front of her.

Now she’s eating almost everything on her plate and has grown two clothing sizes in only a matter of months.

Her inlaws are leading the witch hunt against said mom with her mother-in-law being her biggest critic.

“In my day, my kids were all fed homemade meals and didn’t take part in these ‘fad diets’ that kids today are into. It’s sickening that she can’t take the time to take care of my granddaughter properly.” The mother-in-law continues by saying, “In my day there was no such thing as picky eaters. Kids ate what was in front of them, or they didn’t eat.”

The mom defends herself. As a busy, working mom she feels justified in her decision on how to feed her child. “Sometimes its for convenience, sometimes it’s what she wants. Either way, she’s happy and healthy, isn’t that enough?”

While parents feel like they’re always under attack for their parenting decisions this moms decision could bring about life-long consequences for her daughter.

Nutritionist to the stars, Joanna Blythman, says we don’t need to be feeding our kids starchy carbs at all. That most kids do well on plant-based, raw diets.

Other nutritionists warn that restrictive diets can be harmful to kids, putting them at risk for nutritional deficiencies. That kids need starches and carbs in order to grow.

But is this mom going too far? How much is too much, and where do we draw the line?

5 REASONS TO NOT VACCINATE YOUR KIDS

Mary Malcolm is an author, blogger, and overall swell gal. She's got enough snark to fill a football stadium, but that's probably just because she's out of coffee again. Have something that's pushing your buttons? Send Mary a message and maybe she'll write about it on the site!