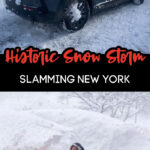 If you are one of those summer-loving people who HATES the cold, you are going to want to avoid New York right about now.

They are in the middle of an EPIC historic snowfall that has slammed western New York with more than 6 feet of the wintery weather.

That’s taller than the average person!!

They are getting so much snow, it’s even bound to give the most die-hard winter lover a bit of pause.

What’s making this snowfall so much greater is the lake effect snow.

Lake Effect snow occurs when cold air, often originating from Canada, moves across the open waters of the Great Lakes.

As the cold air passes over the unfrozen and relatively warm waters of the Great Lakes, warmth and moisture are transferred into the lowest portion of the atmosphere. The air rises, clouds form and grow into narrow band that produces 2 to 3 inches of snow per hour or more.

According to CNN, “snowfall totals of more than 6 feet have been recorded in two locations.”

Y’all. The town where the NFL’s Buffalo Bills play has picked up 77.0 inches of snow — that’s 6.4 feet! This has all happened within the last 48 hours.

As you can imagine, this has pretty much crippled travel in and around the area.

We implore the residents to just, please, obey the travel ban, you become part of the problem very quickly when you’re out there on the streets.

So, basically, you want to avoid the New York area until this mess is over!!