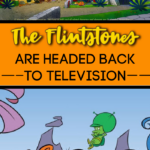 There is a Flintstones sequel series in the works from Warner Bros. animation at Fox, and I am so excited for this reboot!!

Long before the Simpsons and Springfield, the Griffins and Quahog or even when the Belchers started serving burgers on Ocean Avenue, there were the Flintstones and Bedrock.

In this NEW series we are going to revisit Bedrock, but it takes place 20 years after the original, and Pebbles appears to be the main attraction.

Elizabeth Banks, who played Effie in The Hunger Games, is set to lend her voice talents to Pebbles, as well as executive produce the new show.

Now, WAY back in 2019, it was reported that this return to Bedrock may be happening.

BUT, now we have official word that it is definitely a go.

We know that it is going to be a half-hour long comedy — much like the original.

Bedrock’ catches up with the Flintstone family two decades after the original, with Fred on the brink of retirement and 20-something Pebbles embarking on her own career

As the Stone Age gives way to a shiny and enlightened new Bronze Age, the residents of Bedrock will find this evolution harder than a swing from Bamm-Bamm’s club.

Now, thanks to a little TV special that aired in 1993, we know that Pebbles did, indeed, marry Bamm-Bamm Rubble.

We don’t know much else about this revisit to Bedrock, but really, do we need to know much more right now?

It is happening, and that is good enough for me. Squee!

The OG Flintstones ran for 6 seasons, with a huge 166 episodes — and I’m sure I’ve seen every single one of them.

I can’t WAIT for this sequel series to hit, so I can share all the Bedrock fun with my own children.

2 shares
Travis Barker And Kourtney Kardashian Shared Some Serious PDA Pictures Of Their Vacation Together
← Previous
Dunkin's Butter Pecan Sundae Latte Is Back And It Is Like Dessert In A Cup
Next →
Click here to cancel reply.