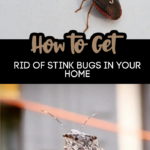 As the season begins to change and the weather starts to cool down, leaves become crunchy while the sun sets earlier in the evening, little critters from the outside begin to look for warm shelter on the inside.

You might think it’s uncommon to see a stink bug or two during the fall and winter season, but noticing a handful in your home is not that rare.

Thanks to Facebook users Merlin and Brenda Miller who shared their life hack regarding the insect, apparently a certain spice in the cabinet can help deter the bug away from your home.

The Millers who noticed several dozen stink bugs sitting on the windows and doors of their home, found that a bottle of Whole Cloves worked to get rid of the unwelcome bugs.

Since spreading the spice inside of every window, the stink bugs have crawled away and haven’t returned!

So the next you’re frying meat, stirring sauce or simmering rice and the recipe calls a sprinkling of cloves, make sure to save a few scoops for the tiny bug too.