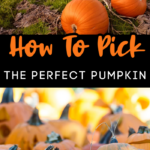 Choosing a pumpkin from the great pumpkin patch comes down to a science, a science of four precise steps.

Whether you choose the biggest one on the farm or the perfectly rounded pumpkin, here’s a “how to” guide on picking the ideal fruit out of the bunch according to the Pennsylvania Department of Agriculture.

Starting with the stem, a sturdy, hard stem at the top is a sign of a good pumpkin.

A noticeably green colored stem, similar to the ones on Pinterest are exactly what you want to pick from.

A stem that feels soft to the touch can indicate rotting so in other words, the greener the stem, the fresher the pumpkin!

All around solid pumpkins and ones that feel heavy including no soft spots are something to keep in mind.

While we all prefer pumpkins that are near perfect, the reality of perfection is unrealistic and neither are pumpkins; so, visual imperfections are common, indentations are normal from vines and a lumpy pumpkin adds character to the windowsill!

Specifically choosing a pumpkin to carve?

Go with a smoother surface versus one that is more rigid.

“Pie Pumpkins” are the smaller pumpkins you see pumpkin patches.

They are often sweeter and excellent for baking rather than Jack-o-Lantern pumpkins.

Take if from Charlie Brown’s friend Linus who waited for the big pumpkin to come; there’s no such thing as the perfect pumpkin but you can get pretty close!