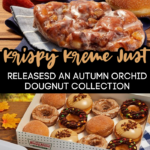 If you’re planning on taking a walk through an apple orchid this fall, do take the time to stop and smell the apples…doughnuts.

And yes that reads “apple doughnuts” because thanks to Krispy Kreme, their latest collection of autumn-themed doughnuts smell and taste like walking through one of Mother Nature’s sightseeing orchids.

And rather than stopping to smell the Granny Smiths or McIntosh hanging on trees, Krispy Kreme’s doughnuts will have your sinking your teeth in a sweet treat rather than the red fruit.

Featuring three new doughnuts with one common similarity of apples, the hot doughnut shop has created the all new Apple Fritters, Maple Pecan Cheesecake, and the Spiced Apple Filled doughnuts.

Returning, are the Salted Caramel Brownie and the Pumpkin Spice Cake doughnuts!

The new Maple Pecan Cheesecake Doughnut features a combination of cheesecake and baked dough, creating a doughnut that’s dipped and topped with maple-flavored icing, pecans, and stuffed with a cheesecake-flavored filling.

Meanwhile, the Spiced Apple Filled Doughnut is exactly how it sounds; a doughnut coated with cinnamon sugar and crammed with apple cider-flavored filling.

So whether you’re drooling now (and you definitely will be later), do yourself a flavor and considering stopping in for a dozen apples, I mean doughnuts, to make your mouth stop watering.

Starting today until October 9, you can snag a box of Krispy Kreme’s Autumn Orchid doughnuts at participating chain locations!