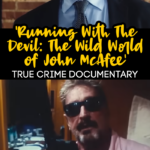 My favorite thing to watch on television is a true crime documentary… seriously, sometimes real life is wilder and scarier than fiction could ever be.

Netflix has been killing it lately on the true crime selection and there is a new one on the way that I can not wait to watch.

I’ve included the trailer at the end of this article and you have to watch it.

According to Deadline, ‘Running with the Devil: The Wild World of John McAfee’ is about how he went on the run after a murder back in 2012.

The person that was murdered was the neighbor of John McAfee in Belize.

John McAfee was a suspect and went on the run… which screams guilty, right?

He also claimed before he died that he was on the run from a Mexican cartel.

So now we have John McAfee, whom we all know as the antivirus guy, the murder, and also a Mexican cartel.

John McAfee died last year, but while he was alive he was convinced that if he was in police custody that he would be killed and that is why he went on the run.

He even took a film crew with him to document everything, sounds a bit insane right? Or is it?

He actually fled to the Belizean rainforest and had guns, alcohol, and even drugs with him.

John McAfee was finally detained in Guatemala in December 2012 and then was deported back to the United States and things just got wilder!

In 2019 John McAfee went on the run once again from U.S. authorities for tax evasion and was finally arrested in 2020 in Spain.

In June of 2021, the Spanish National Court, allowed John McAfee to be extradited back to the U.S. and just hours later he was found dead.

Was this, the death he predicted, or did he commit suicide?

His death was ruled a suicide, but was it really?

‘Running With The Devil: The Wild World of John McAfee’ will release on August 24, 2022 on Netflix and I can’t wait!