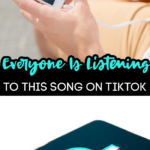 It’s no secret that TikTok can turn a verse into a viral song.

And the latest obsession everyone collectively has tuning into their headphones is thanks to singer Noah Kahan!

Dubbed “Stick Season”, the song which is now on Spotify and Apple Music has turned viral.

Many users went to social media to comment how much they love the song.

“If I were a dog this song would be what I imagine a belly rub to feel like.”

Clearly, the song is a hit!

While the song was first teased during spooky season of 2020, two years later the song has successfully made it to thousands of users airpods and earbuds.

Breaking the top 50 chart with Spotify USA is just one of the accomplishments this song has received, even including many artists putting their own spin on the song such as Maisieh Peters from inspiration with Noah’s lyrics.

From whimsical tunes to relatable versus, TikTok has the power to turn one song into a viral hit, sending artists with beautiful music to climb their way up Top 100 charts and getting their song downloaded.