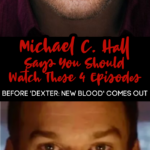 I am so excited, ‘Dexter’ is my most favorite show ever and I can not wait until ‘Dexter: New Blood‘ comes out!

Michael C. Hall, who plays the loveable serial killer Dexter Morgan, says there are 4 episodes that you should rewatch before watching the new season.

I have watched every single ‘Dexter’ episode so many times that I can not even keep count anymore.

Michael told Entertainment Weekly that there are 4 episodes that he recommends watching to serve as sort of a prelude for the new revival of the show.

He said you should start with the first episode listed and then watch them in the order he has listed them in.

The first episode that he suggests rewatching is the pilot episode, which he says is one of his favorite episodes.

He then suggested watching episode 10 from season 1 called ‘Seeing Red’, this is the one with the hotel room that is filled completely with blood and Dexter does a full body slam into the blood.

Then you can skip ahead to season 3, episode 10 called ‘Go Your Own Way’ with Jimmy Smits, he especially loves the rooftop scene.

The 4th episode that Michael says we should all rewatch is the season 4 finale called ‘The Getaway’, this is the season with John Lithgow as the ‘Trinity Killer’.

All of these episodes are available for streaming on Hulu with the Showtime add-on.

Personally, I recommend rewatching every single episode from every season because the show is just that good!

You can watch ‘Dexter: New Blood’ when it premiers on Showtime on November 7th, and I can not wait!