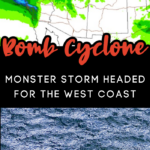 There is a monster storm headed for part of the United States, and it is going to cause problems with large amounts of rain and snow.

Usually when you think of hurricane-type weather, you think of the Atlantic Ocean and the eastern part of the United States.

But weather forecasters are calling what’s coming a “Bomb Cyclone,” and it is headed right for the Western Coast of the United States.

It is going to bring with it LOTS of rain and LOTS of snow to the western part of the country — but you know it will move across the U.S., impacting us all at some point.

This monster cyclone is actually a series of storms that is expected to come in two waves, so get prepared.

They are saying it could dump as much as a foot of rain in certain areas, and 3 feet of snow in the Sierra Nevadas!

Now, much of this region has already been impacted by large wildfires this year. Rain on top of burned land can lead to big problems with flash flooding.

As water runs downhill through burned areas it can create major erosion and pick up large amounts of ash, sand, silt, rocks and burned vegetation (Trees). The force of the rushing water and debris can damage or destroy culverts, bridges, roadways, and buildings even miles away from the burned area.

These storms are potentially going to be even greater because of an atmospheric river pattern.

So basically. There’s going to be rain — and A LOT of it.

Make sure you are prepared with supplies and emergency kits, to be on the safe side!

The storms are expected to hit this weekend, and again into Monday.