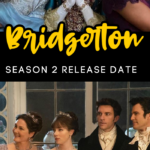 Man, I was glued to the OG Bridgerton!! The Duke of Hastings, AMIRITE?!?

Now, unfortunately the Duke’s story doesn’t move past book one — which means season 1 of Bridgerton — but I’m sure we are still in for more devilishly handsome dudes in season 2 of the show!!

We have known that a season 2 is coming for quite awhile, but we FINALLY have a release date, and I couldn’t be more excited!!

Apartenly, not even the cast knew when the release date was going to be — but we all know now!

According to a sweet little video of the cast released on social media Christmas Day, the date we head back to the Ton will be March 25, 2022.

One year ago today, our buzzy Ton was born 🐝 Happy Anniversary, dear readers. This author does hope you enjoy your gift… Bridgerton returns March 25, 2022, only on Netflix.

In the video, the cast members are handed a piece of paper which includes the release date for season 2 of Bridgerton, and they are obviously as excited as us!

The first year of any anniversary is the Paper Anniversary, so it is very fitting that the cast members were handed a piece of paper — of course, written by Lady Whistledown — that included the drop date.

Happy anniversary to our buzzy ton. It is customary for a first anniversary, to gift paper, dear readers. I do hope you find this one informative. Bridgerton returns March 25

According to EOnline, “In season two, fans can expect Anthony to take center stage as he attempts to settle down and finally take his place at the head of the Bridgerton family. Of course, every Lord needs his Lady so romance is going to sizzle again in the keeping with the tradition of the novels when Sex Education’s Simone Ashley pops up as his love interest.”