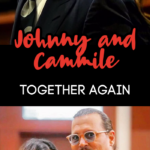 Whew. We are just coming off the high of the Johnny Depp versus Amber Heard Defamation Trial, and now what do we talk about, right?

It looks like Johnny Depp and Camille Vasquez are back at it, reuniting for another trial.

Gregg “Rocky” Brooks, the location manager for Johnny’s movie City of Lies, is alleging that Depp assaulted him during filming.

Supposedly, Johnny got a little upset during filming in L.A. and hit Rocky twice in the ribs. He then yelled at Rocky, challenging Rocky to hit him back.

We don’t know exactly how much money Brooks is suing Johnny for, but the counts include “assault, emotional distress, wrongful termination, and retaliation.”

According to Rocky Brooks, on April 13, 2017 he was with Johnny onset of the film.

Rocky says it was at this point that Johnny verbally and physically assaulted him.

Johnny’s breath supposedly “reeked of alcohol,” and his guards had to jump in to physically restrain him from beating the crap out of Rocky.

Rocky is alleging that, because of the incident, he was let go from the film — fired.

On the Monday following the incident, April 16, 2017, plaintiff returned to the production office to work on wrapping out the show — Upon arrival, plaintiff was informed that Segal wanted him to write and sign a declaration stating that he would not sue the production. When plaintiff declined to write such a statement, his services were terminated immediately.

So, of course, Johnny is bringing in the big guns.

Camille Vasquez, who is famous now in her own right, is going to step back in court to defend Johnny’s honor.

I don’t know about you, but I hope every minute of the trial is televised. I can’t wait!!