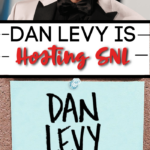 Shut up, David!! Dan Levy is going to be hosting SNL — that’s Saturday Night Live for all you old timers — and I’m completely chill AF about it.

SNL announced that they will be coming out of winter hiatus on January 30th, and they are starting the second half of the season off with a BANG, including shows hosted by John Krasinski, Regina King, and DAN LEVY!!

In other words, some pretty bad a** shows!!

John Krasinski is starting off this stellar line of hosting SNL on January 30th. His musical guest will be Machine Gun Kelly. So in other words, I’m going to be glued to my television!

Then, on February 6th, it’s DAN LEVY!!! I can’t wait. You KNOW this is going to be a show that you are going to want to watch.

Not only is Dan the co-creator of Schitt’s Creek, but he is one of the funniest dudes I know! He is going to KILL this SNL gig!

Then, on February 13th — which will be the Valentine’s episode of SNL — Regina King is going to bring the funny to the SNL soundstage.

This will be the FIRST time hosting for all 3 actors, and I’m sure they will be nervous AF, but it’s also going to be HILARIOUS!

It has been over a month since SNL went on winter break, with their last show of 2020 happening just before Christmas. Just a LITTLE bit has changed in the country since.

I can only imagine all the content that will go into Weekend Update. Ha!