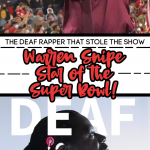 I read a lot of comments on Facebook asking what were people’s favorite parts of the Super Bowl. Well, considering I’m not a football fan (go Stars!), I would have to say it was Warren “Wawa” Snipe!

Warren “Wawa” Snipe pretty much stole the spotlight! He performed ‘America the Beautiful’ as well as ‘The Star-Spangled Banner’ in sign language at the Super Bowl LV.

Sign language is something I wish more people would try to learn and I love watching people that are way better at it than I am. Of course, he is deaf so he is brilliant with sign language performance.

The best performance to start the #superbowl is Warren Snipe with the ASL Star Spangled Banner. I don't sign but I want to learn now! #SuperBowl2021

Everything was perfect, from his smile to his expressions and body movements! Signing is one thing, but when you sign a song it is so magical to watch!

I also know that my deaf and hard of hearing friends appreciate it when someone is signing with the music. They can feel the vibrations and enjoy the music, but they still want to know the words to the music as well.

He’s also a rapper and released an album called ‘Deaf: So What?!’ back in 2016. The dude doesn’t stop there, he’s also an actor and has a recurring role on ‘Black Lightning’ on the CW.

Warren Snipe is the artist who just performed the National Anthem in ASL at the #SuperBowl.

He stole the show pic.twitter.com/AiClpgt7uC

Warren “Wawa” Snipe was a theater major in college and even developed “Dip Hop”. He described it as “Hip Hop through Deaf Eyes” to CBS News.

So yea, Warren is my favorite part of Super Bowl Sunday!