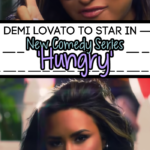 Demi Lovato will be starring in a new comedy show called ‘Hungry’ from Suzanne Martin. This will be her first scripted television role in like… forever!

I’m a mom of all daughters, so you can imagine that most of my television knowledge revolves around people like Demi Lovato.

‘Sonny with a Chance’ was seriously popular with my kids.

Also, who could forget ‘Camp Rock’… they still watch that! I probably even know most of the words to the movie.

The new show is called ‘Hungry’ and it has received a put pilot commitment from NBC. Demi Lovato is also one of the executive producers for the new series.

It is being written and executive produced by Suzanne Martin, the creator of ‘Will & Grace’ and ‘Hot in Cleveland’.

She also won two Emmy Awards during her time as a writer and producer on ‘Frasier’ which is one of my all-time favorite shows.

‘Hungry’ is about friends that all belong to a food issues group. They all help each other with life including the battle over food.

Demi has had a long hard road for a bit and made quite a comeback. I’m excited to see where this all goes, what about you?