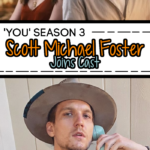 Joe, oh how I miss you! You were the serial killer character that filled the gap in my life where Dexter had gone missing.

I am super anxious for season 3 of ‘You’ to come back! I need to see where this is all heading, like what’s happening with the baby, I need answers!

It’s a bit ‘Dexter’ ‘ish don’t you think? The baby bottle, the blood… But Joe and Dexter are very different when it comes to killers, I’m really trying to figure out how this will go.

They are still adding new cast members and the newest addition is Scott Michael Foster. He had starred in ‘Crazy Ex-Girlfriends’ and now he is joining up with my second favorite serial killer.

He will play Ryan, who is a local television reporter, in a recurring role. Ryan is also a single dad who has overcome a history of addiction,

It appears that Ryan has secrets though, so this is going to get interesting! I am just ready to see Penn Badgley and Victoria Pedretti again!

If you remember, in the second season, Joe and Love had a lot in common. Is it going to last? Is it really Love?

Or are they both just a bit too psycho? Either way, I am beyond ready for it, it has been way too long!

84 shares
Michael Cyril Creighton Has Been Added To The Cast For 'Dexter' Season 9
← Previous
Demi Lovato Is Starring In A New Comedy Show About Food And I am So Excited!
Next →
Click here to cancel reply.