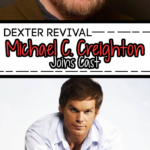 Showtime is still announcing cast members for the ‘Dexter’ revival. I’m still holding out hope for Hannah and Harrison!

The newest addition is Michael Cyril Creighton from ‘Spotlight’. He will have a recurring role in the new limited series of ‘Dexter’ with Michael C. Hall.

If you haven’t yet heard, ‘Dexter’ is coming back with 10 episodes after 10 years of me waiting for a redemption of the original ending. I need closure!

In the new series, Dexter is living under a new name in Upstate New York. Michael C. Creighton will play Fred Jr, who owns a Fish and Game shop in 7 episodes.

Michael C. Creighton will also be on Amazon’s ‘A League of Their Own’ which will be coming out soon.

My idea was that Dexter would come back and reunite with Hannah to help Harrison who had discovered his own “Dark Passenger”, that was my hope anyhow.

Wouldn’t that be brilliant? Harrison was also left in a pool of his mother’s blood, it would make perfect sense that it imprinted upon him the same urges it did on his father.

Production for ‘Dexter’ will start in February, filming in Massachusetts. The newest season of ‘Dexter’ is expected to air this fall on Showtime and I can not wait.

80 shares
Here's The Teaser Trailer For 'Assembly Required' With Tim Allen And Richard Karn!
← Previous
Scott Michael Foster Has Been Added To The Cast of 'You' Season 3
Next →
Click here to cancel reply.