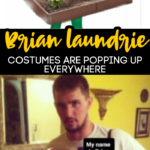 Halloween is kind of a free for all with what you choose to wear. You can be sexy, political, funny, even a bit controversial. But is there a line?

With Brian Laundrie being one of the biggest topics going on right now, sure, it would make sense to think a costume about him would be a good idea…but it’s not.

Some are literally trying to dress up to look exactly like him, which could be an issue with the authorities and those still searching for him. While others, are trying to be…let’s just say, extra creative.

Some are taking ‘Laundrie” and making it literal laundry. And others are being the flowerbed that he’s supposedly hiding in.

Despite the attempts to be funny, the family of Gabby are still mourning her death, which is assumed to be at the fault of Brian Laundrie. So flaunting around jokes about him are probably not the nicest thing to do right about now.