Dylan McDermott Is The Newest Addition To ‘Law & Order: Organized Crime’ and It Just Got Hot In Here 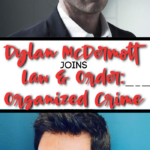 Oh yea, this is what I am talking about!

Most of you probably know Dylan McDermott best from his role on ‘The Practice’.

Anyhow back to modern times… Dylan Mcdermott was nominated for 2 Emmy awards for his work in Netflix’s ‘Hollywood’.

Seriously, Law and Order’s cast is on fire and in the best way possible *swoon*.

I bet Leslie Jordan is freaking out right now. He did start the official “Dylan McDermott Fan Club for Middle Aged Gay Men!”

I don’t blame Leslie, Dylan does seem to have it right? They’ve had this ongoing banter back and forth and it’s hilarious.

Dylan will be starring alongside one of our favorites, Christopher Meloni.

Right now we do not know what role Dylan is playing, but I guess we will find out soon enough.

Christopher Meloni will be returning as Elliot Stabler for his 12th season. In this spin-off, he has returned to the NYPD and is focusing on organized crime with a new task force.

The SVU spin-off ‘Law & Order: Organized Crime’ will premiere later on this year. Well, as long as Covid cooperates that is.

Until then, here is Dylan reading some thirst tweets. Enjoy…

377 shares
Here's The First Look At Kristen Stewart Playing Princess Diana and The Resemblance Is Uncanny
← Previous
$1,400 Stimulus Payments May Pass As Early As This Week. Here's What We Know.
Next →
Click here to cancel reply.