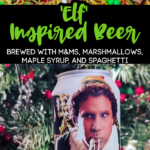 Where are all of my ‘Elf’ movie lovers, because this post is just for you!

Martin House Brewing Company from Fort Worth, Texas… the geniuses behind the Best Maid Sour Pickle Beer have created a new beer in honor of the Christmas Movie ‘Elf’.

They didn’t pull any punches when it came to what the beer was brewed with, they went full-on ‘Elf’ with it!

It’s as if Buddy stepped in and took over the brewery himself when the Cotton Headed Ninny Muggins Beer was created.

The Spaghetti part made me take pause, but after reading more about the new beer I learned that it actually doesn’t taste like spaghetti at all.

The 8% ABV beer actually tastes like a maple stout according to Shugg Cole, the marketing director of Martin House Brewing Company.

Martin House Brewing Company is known for their strange beer brewing combinations and I have been pleasantly surprised by all that I have been able to try.

While the Cotton Headed Ninny Muggins beer was the first that ever used spaghetti, they have many crazy combinations and release a new beer weekly!

Cotton Headed Ninny Muggins won’t be around forever, so if you want to get your hands on some, you better do that now.