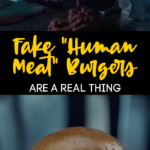 When I first read about “Human Meat” Burgers, my initial reaction was disgust.

I mean, logically I was like… yea no… it can’t be real, even though I know there truly are cannibalistic people out there walking around like it’s normal.

Apparently, a European company called ‘Oumph!’ created a burger last year that they said tasted like human flesh, but how would they even know what it tastes like?

The burger was launched last Halloween in Sweden and marketed as a Human Meat Plant-Based Burger.

We developed this burger in no time as soon as we knew what taste and texture we were after.

Nasty… who would even want to try that, even if it is plant-based…

No humans were injured in the development of this product.

This was literally something they did to get people to try the product, but who would be drawn to that?

Who would want to eat something that supposedly tastes like the flesh of humans?

They even made a short commercial for the plant-based human meat tasting burger which I’ll post below.

They said that this was to get meat-lovers to try a plant-based meat product, implying that they could recreate the taste of any meat… EW!

And of course, a solution was to make a tasty plant-based human meat burger.

The plant-based burger is actually made with mushrooms, wheat protein, soy, plant-based fats, and a “mysterious spice mix”… yea that doesn’t sound questionable at all…

Would you try it?