The ‘Friends’ Reunion Finally Starts Filming Next Week And I Am So Excited! 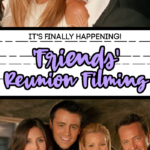 I mean, we’ve only been waiting through an entire pandemic right? All of last year we waited and waited, sadly, pandemics are a pain in the butt and can’t really be regulated.

Next week the ‘Friends’ reunion is actually set to start filming (fingers crossed) at original Warner Bros. soundstage in LA.

All 6 of the original ‘Friends’ case will reunite on that original stage, Stage 24, for this event!

However, I guess something changed along the way, or information was wonky, because apparently this reunion is not of them in character.

David Schwimmer confirmed that he and his former co-stars are reuniting as themselves. Like no Ross, no Chandler, no Monica, etc… just themselves as real people.

I guess that’s ok? I just really thought it was going to be an episode as the characters from the show we have missed so much.

HBO Max hasn’t commented on the details, but Deadline confirmed with sources that this is the way it is. Also, David Schwimmer confirmed that they will not be in character when they shoot the reunion.

So basically the reunion is a reunion of the cast, sitting down and chatting about the show.

The final episode of ‘Friends’ aired back in 2004 and I can not believe it’s really been that long! The same Stage 24 was used for the spin-off ‘Joey’ with Matt Le Blanc.

Now we wait! I didn’t see any sort of release date for the reunion special as of yet, but as soon as we know… so will you!

1shares
Regé-Jean Page Is Not Returning for Season 2 of 'Bridgerton' and I'm Not Okay
← Previous
Here’s How You Can Take A Photo of The Easter Bunny In Your House
Next →
Click here to cancel reply.