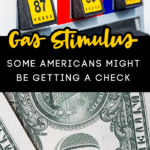 There is a chance that lower-income Americans will be receiving gas stimulus checks sometime this summer.

These gas stimulus checks would help so many people that are desperate for funds to cover what is shaping up to be liquid gold.

For a while there, it seemed like gas prices were slowly starting to come down.

But, that was short lived. I just came home from getting gas, and the price per gallon is higher than it’s ever been. I nearly cried.

And, with summer imminently approaching, the price of gas is only going to go up.

According to Yahoo, the demand for gas usually goes up in the summer. That can be blamed on the number of people hitting the road for vacation. It always jacks the price of gas up to crazy highs.

There goes that summer road trip we had planned!

Now, we not only have the summer to contend with, but there is that whole war in Ukraine thing. Because of the war, Biden has banned Russian oil from being imported in the States.

All these things combined will most likely equal tears at the pump for the foreseeable future.

— it’s basically impossible to get a good gauge on where we’ll be this summer because of the wide range of possibilities.

There is a proposal up to bat called Big Oil Windfall Profits Tax. This proposal would place a levy on per-barrel tax from major oil companies.

Huh? What does that mean?

Basically, there will be some excess money in the fuel department, and that extra money might pay for stimulus checks for lower-income Americans.

Congressman Ro Khanna and Senator Whitehouse are also working on a plan to cap gas prices.

HOPEFULLY, this will bring some much-needed relief to the pockets of those who truly need it.

What are these Gas Tax Holidays that we’ve been hearing about?

With the Gas Tax Holidays, consumers wouldn’t have to pay the tax on gas.

These Gas Tax Holidays are coming in on a state-by-state basis, with Maryland, Georgia, Connecticut, and New York already approving the tax holiday.

The holiday is only for a specified amount of time — but ANYTHING helps, right?!?

Even more states are considering adopting this Gas Tax Holiday. Here’s hoping that my state jumps on the bandwagon with these tax holidays!