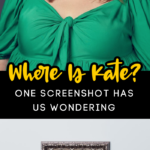 We are getting closer to the May 24th series finale of This Is Us. *Sad Face*

Though the end is imminent, all the fans of the show are Just. Not. Ready. to say goodbye to The Big Three and the rest of the Pearson clan.

Let me preface this by saying, there WILL BE SPOILERS AHEAD.

If you don’t want anything about the show spoiled for you, stop what you are doing and go get yourself caught up on This Is Us. I’ll wait.

We’ve already lost Pearson patriarch, Jack. That was heart wrenching all by itself.

Then we were all devastated by the loss of Jack’s best friend, Rebecca’s husband, and stepdad, Miguel.

Just when we all had become in love and attached to the character, right?

Now, we are facing the impending passing of Rebecca, who is currently not doing well. *Holding Back The Sobs*

But, one keen This Is Us fan now has us worried about another member of the Pearson family.

This fan posted a screenshot from next week’s promo for the second to last episode of the show.

In this screenshot, the entire family seems to be gathered together.

But there is one question. Where the heck is Kate?

One of two tragic things might be happening here.

Either way, a rather devastating end to the Pearson story.

Whatever happens, it’s going to be BIG.

Mandy Moore sat down with Jimmy Fallon to discuss the ending of the show.

I will tell you that the penultimate episode, which airs in like a week, I threw up after I read it. — I think that you might need, like, a day off from work.

Mandy Moore on The Tonight Show

Gasp! This is going to be a hard “goodbye,” y’all!

What do you think is going to happen? Let us know below in the comments.