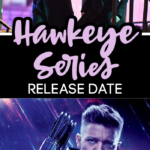 Do the people that work at Marvel ever sleep? Like seriously, there’s something new EVERY DAY.

Now it’s time to get ready for their next project, the Hawkeye series. And if it’s anything like the other Disney+ series, we are in for a TREAT.

We finally have a release date! The premiere of Hawkeye is set to release on Wednesday, November 24th on Disney+! We finally get to see Hawkeye meet Kate Bishop, played by Hailee Steinfield!

Steinfield dove into the original comics after getting her role and has been excited to play her out! I feel like she’s a perfect fit for the role personally!

“We’re treating our shows as if we’re making our features. I mean, the feel and the quality of those TV shows are going to be like the Marvel movies that you’ve seen. So that’s always been [Marvel Studios president Kevin Feige]’s mindset of let’s make sure that when people are going to be watching these episodes, it’s going to feel like it’s just one long movie except rather than two-and-a-half hours, it’s going to be much longer. And the idea behind certain characters getting their shows is because we’ll have a lot more time to be able to develop these characters rather than the shorter.”

Although Hawkeye isn’t one of my favorite Avengers, I’m sure it’s going to be just as amazing as the rest of the recent releases!