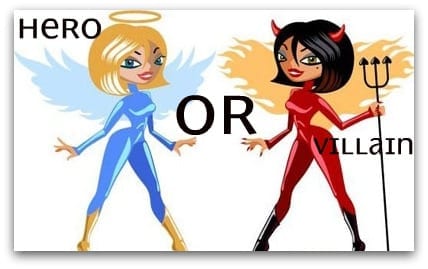 Since I’ve been thinking a lot about super powers lately, I’ve been trying to decide what makes a hero and what makes a villain. I mean, at first glance that seems like a pretty obvious answer, right? Heroes are good and villains are bad.

Sure, there are some guys that are super evil and nasty like The Joker, but he was just some guy who got really screwed up and is now super pissed about it, right? So we villainize him.

Is villainize a word?

But then there are guys like Batman who, frankly, kind of blur the lines. That guy pisses off cops all the time, he lies about who he is and where he’s been, he breaks piles of stuff. (There’s nothing I love more than when the good guys come in to stop the bad guys from destroying the city and then–destory the city.)

Is it the media? Like for a while everyone decided Spider Man was hindrance to the city. Was he, for that brief period, a villain because he wasn’t in the city’s favor?

Anyway, what I want to know is–what would you be? Would you save damsels and dudes in distress, or would you strive for endless power?*

If you had to be a super something would it be a superhero or a supervillain?

I hate to say it.. but i am the one who strives for the top. I dont know what I would do given super powers.. I should would LOVE to smash the heads in of every asshole out there than neglects and tortures animals.. and if that person were a father, and I smashed him into obliteration would I be a villain?? Because I wouldn't care who you were or where you came from.. To me there's no excuse.

I think that would be my "super power cause" right there .-= Lindsay´s last blog ..Should I change my logo? =-.

@Lindsay, haha and that's a good one too!

I would totally be a super hero. I'm a people pleaser so villian goes against that very large part of my nature. Also, the hero usually gets a better tshirt in her honor. Plus, I would not want yucky villian lovers going around looking smug in my villian tshirt. .-= Aimee Bartis´s last blog ..My blog situation =-.

@Aimee Bartis, haha that's true--Captain Hammer had like the best shirt ever.