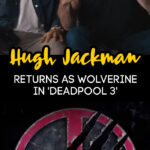 Hugh Jackman is reprising his Wolverine role for Deadpool 3, and I can’t freaking wait!!

I’m a little embarrassed to admit that I JUST watched Deadpool. But, OMG! It is next-level hilarious.

That pretty much sums it up.

Is there any Ryan Reynolds film that’s not just about perfect?!?

Ryan has been trying to get Jackman to return as Wolverine for some time. BUT, because the fates are kind, it’s finally happening.

This marks his first appearance in the MCU, and it’s going to be a great one!

The pair announced the Wolverine / Deadpool collab in a video teaser trailer.

And, in typical Ryan Reynolds fashion, it’s hysterical in the driest way possible.

I’ve had to really search my soul on this one. His first appearance in the MCU obviously needs to feel special. We need to stay true to the character. Find new depth and motivation. New meaning. Every Deadpool needs to stand out and stand apart. It’s been an incredible challenge that has forced me to reach down deep inside. And — I have — nothing.

Right on cue, Hugh Jackman walks across the screen in the background.

Hey, Hugh. You want to play Wolverine one more time?

Hugh doesn’t even think about it — just keeps on walking.

See the Deadpool video below.